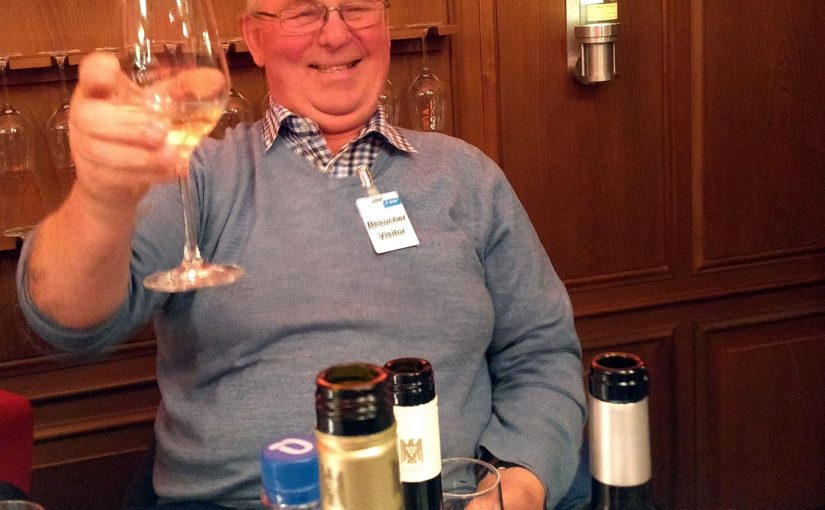 I’ve just come back from a few days away on a Farmer Study Tour to Mannheim, Germany, with the Liverpool Agricultural Discussion Society (LADS).

Lets get the well deserved credits at the top of the page: Antony Ollerton (LADS), Colin Mountford-Smith (BASF) and Cornthwaites (John Deere) for organising the event and BASF for putting in a sizeable financial contribution which covered the bulk of food, transport and accommodation costs. I am sure all the attending 18 members of the discussion society are very grateful to all those involved directly and behind the scenes. Photos in most of the sites we visited were banned so please excuse the lack of photos.

First visit of the tour was to John Deere factory and tractor museum at Mannheim. The final assembly line was a sight to see with all the different variants being built to order on one line. The paint process stood out for me and I now much better understand how such a high quality finish is achieved. The museum was a tribute to the heritage of the site with many examples of the Charles Lanz Bulldog tractors which were originally made there.

After lunch in the canteen at Mannheim we went to the John Deere Cab factory at Bruchsal. Making the cabs for all the tractors, combines and forage harvesters. I had no idea so much stuff was packed into the cab roof and would now not recommend anyone ever ‘fitting a bracket’; far too risky with a real chance of a massive bill!

The Bruchsal site also hosts a worldwide spares and distribution store. A massive facility with worryingly few humans employed given the size of the task. Whatever can be automated has been and you get the feel that as technology allows the few remaining workers will be under pressure. A really impressive facility but I felt it was a bit of a dystopian view of the future where just a few humans remain in roles solely to service the robots.

An early start for the visit to the BASF plant at Ludwigshafen. A site that covered over half the town with facilities on both sides of the river. Absolutely no photos were allowed inside the plant which must be one of the most complicated man made structures on the planet with every square inch a rat’s nest of pipework. From the production site we went to the packing site and saw how the liquids were decanted from railway bulk tanks into the small bottles that we end up with on the farm. BASF put on a very nice lunch in ‘the Casino’ before a tour of the BASF wine shop and a tasting/education session after a tour of the extensive and well stocked (world famous) BASF wine cellar. Who knew?

After an afternoon getting ‘educated’ at the BASF wine shop we transferred to the Barrel House for our evening meal of Potato Soup with fried black pudding, Fass-Teller Saumagen, and Apple Fritters.

Another early start for a farm visit. The guided tour of Farm Geil at Harthausen couldn’t take place as the land was so wet so we were limited to a talk in the pack house which, at the time of the visit, was repacking Egyptian spring onions after having completed the home grown leek orders. Visit www.gemueseanbau-geil.de for more information.

The coach then took us to the BASF Agriculture Centre at Limburgerhoff for presentations and discussions about a wide range of topics from BASF strategies and communication, future ways of working, product licensing, GM and much more. It was welcoming to see the real passion of the BASF team and their openness to suggestions on opportunities for improving many aspects of the value chain.

Dinner was held at the Restaurant Skyline in Mannheim which at 250m high, affords spectacular views over the Rhine and Mannheim as it rotates 360 degrees every hour.

A 6 O’Clock start to check out and get the coach to John Deere Zweibrucken where sheet metal goes in one door and completed combines and forage harvesters come out the other end. A really fascinating tour with some real engineering on display rounded off the trip nicely. An overnight stay in Homberg before our return flight gave us a welcome few hours of free time to relax or explore the caves under the Schlossberg Hotel.

Thanks again to Antony, Colin and all those behind the scenes that made this trip possible and I do hope that the new communication channels BASF aspire to establish with the farming community deliver the goods.

First prize at the Hesketh Bank Village Show for my ‘Harvest Circle’ creation. I’ve never done any flower arranging before but I couldn’t miss out on the chance to include logs, pumpkins and wreaths so very pleased with coming first!

Slices of our home grown Silver Birch made up  the base with a simple squash centrepiece with a pine cone, barley, cotoneaster and ivy decorations.

A request for a wooden Achtung Minen sign for use as a prop at an event is not an every day request but I have learnt it never to be wise to be asking too many questions.

Whilst waiting for it to be collected it has been pressed into active service sending a not so guarded message to our errant local dog walkers. We’ll see if it makes any difference.

For use behind a compact tractor or ATV it should be just the job for extracting logs and brash without making a mess.

On fields eerily shrouded in mist, the 2016 Giant Pumpkin harvest has begun. All the giant pumpkins that have not been sold in advance will be listed for sale on www.bigpumpkins.co.uk/pumpkins-for-sale/

I don’t suppose many people will actually need a tutorial in how to paint a pumpkin for Halloween but it might be of interest to see the finish achieved using Annie Sloan Chalk paint. The little pumpkins are available from our pumpkin farm shop www.BigPumpkins.co.uk

I selected the Annie Sloan ‘Graphite’ chalk paint as I wanted a dark, soft, velvet finish.

The difference between wet and dry is significant so don’t be disheartened by the gloss of the paint when wet.

The dried paint was exactly the texture I had imagined but perhaps a bit lighter than I had hoped for.

One coat was probably not enough but the effect was close to what I had been seeking. Perhaps I will try another with some blackboard paint…

A very busy day making the most of the sunshine to get caught up with all the field and footpath mowing but the highlight was cutting our first pumpkins of the season. It usually gets to September before the PR people remember to think about Halloween but quite a few have been making enquiries already.

The first order was just for a few pumpkins and quite on odd mix but ours is not to reason why. I look forward to seeing the finished piece.

We always grow a few pumpkins under glass so they are ready for sale that bit sooner. Due to the poor weather, the outdoor pumpkins are only just beginning to set but hopefully they will be ready for the mid October harvest.

For more information on our pumpkins please visit our www.BigPumpkins.co.uk website. 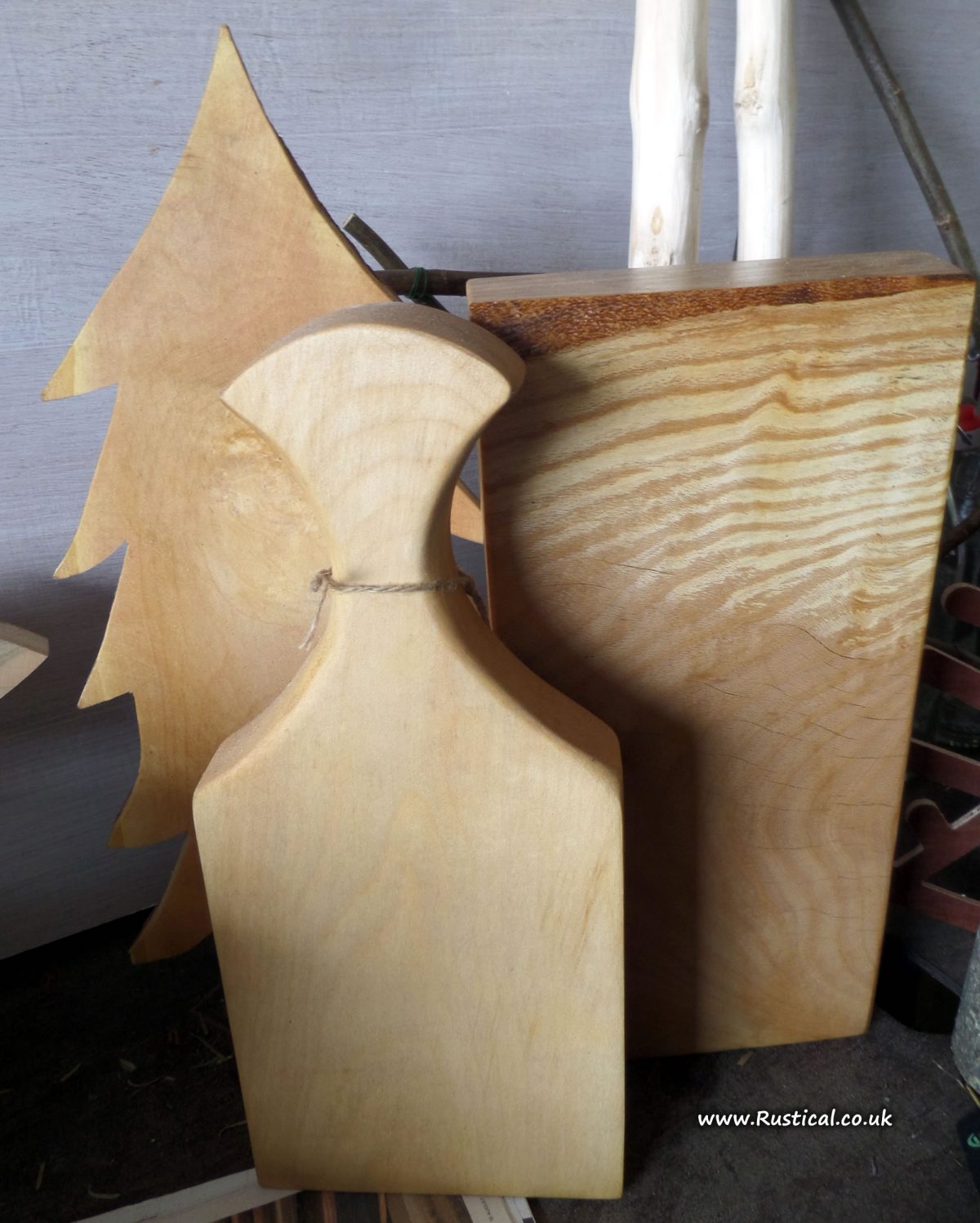 The past few days have taken place in a large cloud of sawdust as we try and catch up on a few bespoke orders for BIG chunky chopping boards.

Thick milled planks are cut to best make use of their individual natural grain patterns. All boards are marked out by hand and consequently no two boards are ever the same.

Our boards grace many a TV studio kitchen and are also used in photo shoots for an ever increasing amount of in house and retail food magazines.

Interestingly, when our chunky chopping boards leave Lancashire and travel down the motorway, somewhere around Watford they become ‘Rustic Serving Platters’ and the price quadruples!

As the trend for rustic weddings has increased so has the demand from caterers and wedding planners (professional or DIY) for these boards. Subject to availability (and enough notice) we also do log rings and slices for cake stands.

For a small additional fee, we can also personalise a board with a text message or logo burnt into the edge or surface of the board.

We can’t do ‘urgent’. We may have something suitable already in stock but if not it takes time to locate suitable logs and get them transported and milled. It then takes at least two years for the milled boards to be air dried sufficiently before they are ready for turning into our lovely rustic serving boards.

Our Chucks have considered all the information in the £9m leaflet and cast their votes early.

Having already completed the Artisan Foodworks ‘Basic Breadmaking’ course at some time ago, the ‘Mastering Sourdough’ course was a natural follow on.

David and Julie were again the perfect hosts and the gang of eager students were a good bunch.

My haul of my own handcrafted sourdough bread made on the day was impressive:

For a novice it is an awful lot to take in but having spent a few hours re-reading the course notes and watching youtube tutorials it is now all fitting into place.

David sent us all away with a cup of his treasured sourdough starter which I have been nurturing carefully.

Flying solo, I have now proudly produced my own sourdough pizza base and a couple of wholemeal loaves and am slowly gaining a bit more confidence.

At present I am minimising variables and using the electric oven but with a view to having a go in the wood fired oven very soon. All good fun!