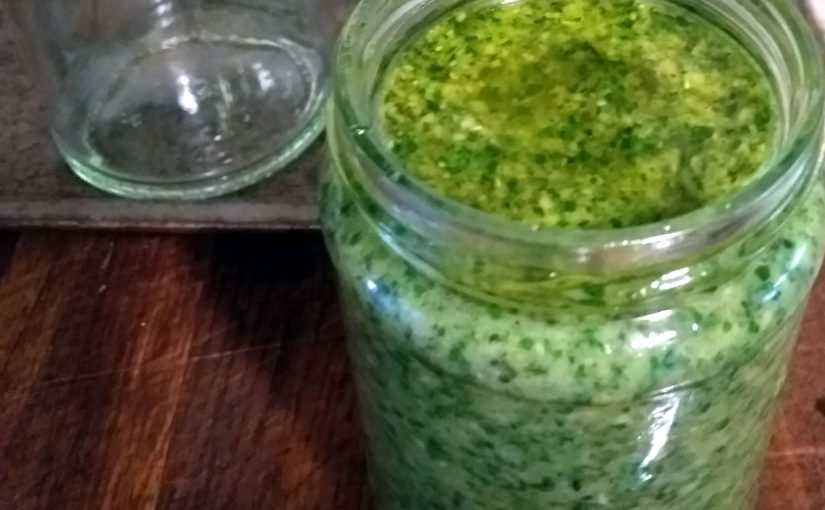 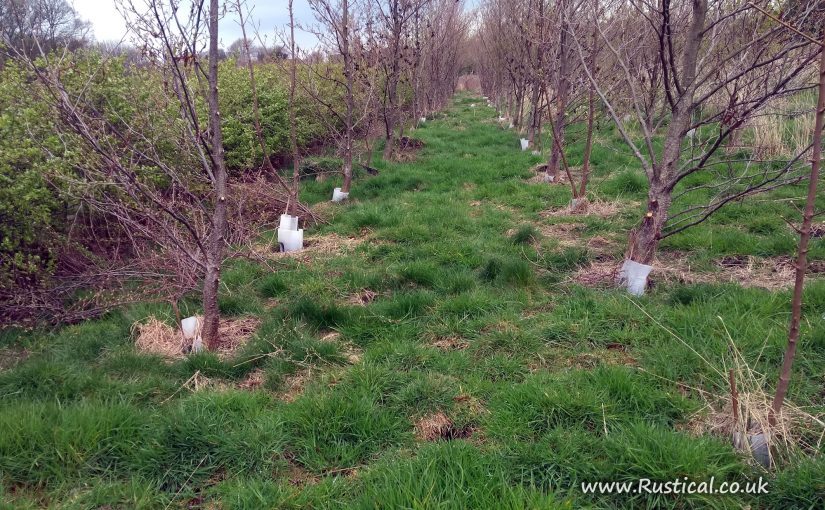 The bee hives have been moved so it was out with the loppers and secateurs this morning, clearing overhanging brambles and branches to create new paths through the trees.

It’s a small field, fully fenced and stocked with a crop of short rotation coppice (mainly alder and sycamore) with some clearings all of which is perfect for someone to be able to takes there dog to be exercised or trained.

Rain stopped play but a few more hours work and it should be ready for a pass with the mower before being ready to rent. 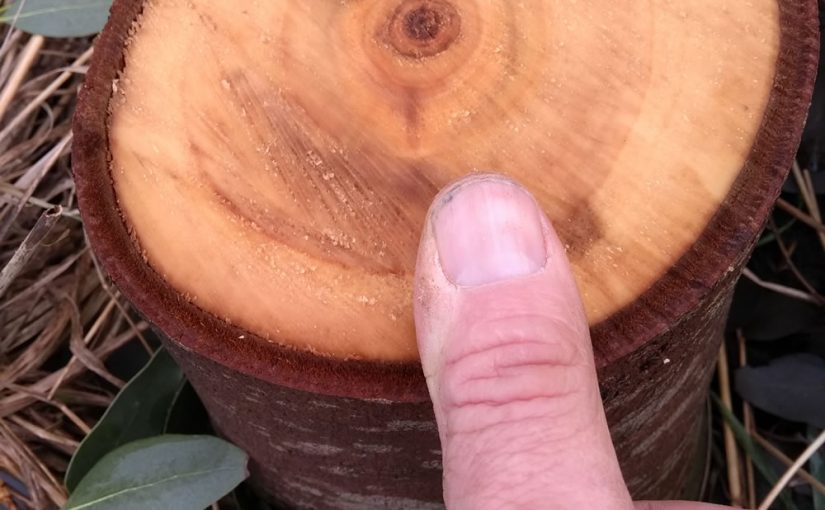 We originally chose a six year trial for hybrid willow to test the claims made by retailers of the willow for firewood production. Not a particularly scientific approach but, hopefully, it might be useful to share the findings:

Hybrid Willow
These were established willow stools which had been previously cut annually to provide more plants. Bred for biomass production these should normally be mechanically harvested every three years and converted to woodchip but retailers often claim they will also make decent logs at the six year point.

Our observations were that it did exactly what it said on the tin, growing some fantastic rods at the three year point which were an optimum size for both a forage harvester but, more importantly for this trial, a perfect size for feeding into a branch logger. After year three we saw a few stools split in storms but overall little more significant growth. At year six there would be no more than two or three 10″ logs on each rod non of which was of a size that would warrant being split. For us, this is more of an inconvenience than a gain; far better to pop the whole lot through a branch logger at year three. For the record, once dried, the hybrid willow is extremely good kindling product for wood burners and perfect for wood boilers.

Alder
Having been asked to grow Alder to supply local smokehouse we had already been taken with how fast it grew. For comparison we planted some one year old transplants to compare with the willow growth. They have produced approximately a quarter of the volume of the willow in this period but it would be interesting to compare the regrowth of an established but coppiced Alder; I suspect the gap would be much less.

Sycamore
With the onslaught of Ash dieback, sycamore was being promoted as an near comparable product to the ‘very best’ firewood. Whilst it was never expected to grow with the same vigour as the other species in our trial it was a useful reference.

Eucalyptus
An afterthought to the trial our Eucalyptus was introduced a year after the trial had begun. It was bought as seed which in reality put it two seasons behind all the other species. Growth was nothing short of phenomenal providing decent firewood logs at year four/five.

For us there is no debate; for growing firewood logs Eucalyptus is the clear winner. Each of the three Euc varieties trialled (Gunni, Omeo and Mountain Gum) out performed everything else. An added benefit is that even our small plantation provided enough shelter for a Barn Owl to take up residence.

In conclusion and for our own circumstances, Eucalyptus wins for ‘grow your own’ firewood logs for wood burners, hybrid willow wins for branch logging / biomass for wood boilers. 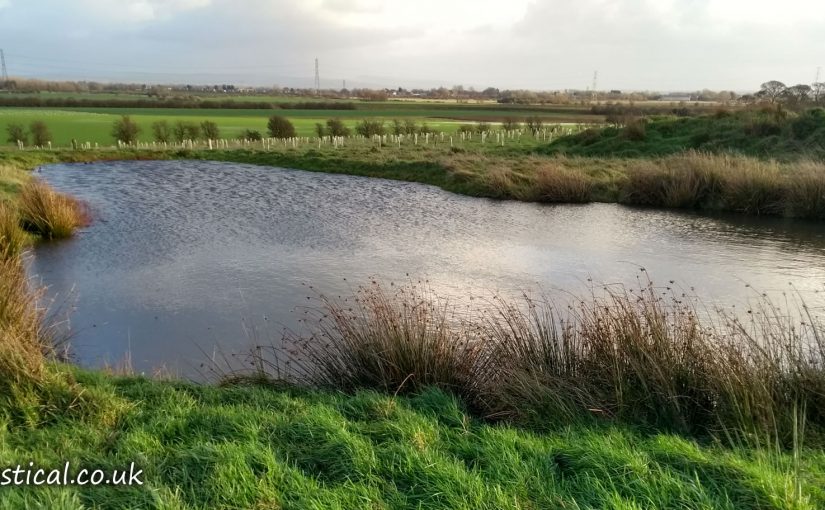 The recent rainfall has raised the water level in the scrapes to full with each overflow now running. It’s hard to believe how quick the ground recovered from the earthworks. 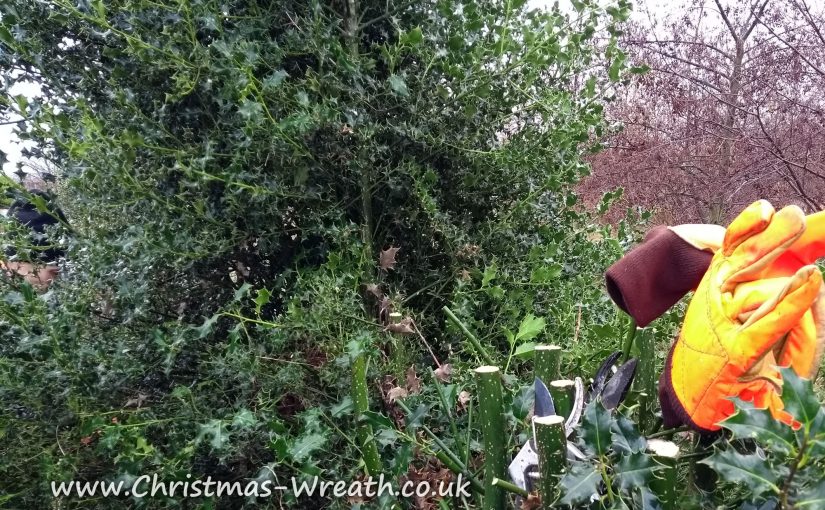 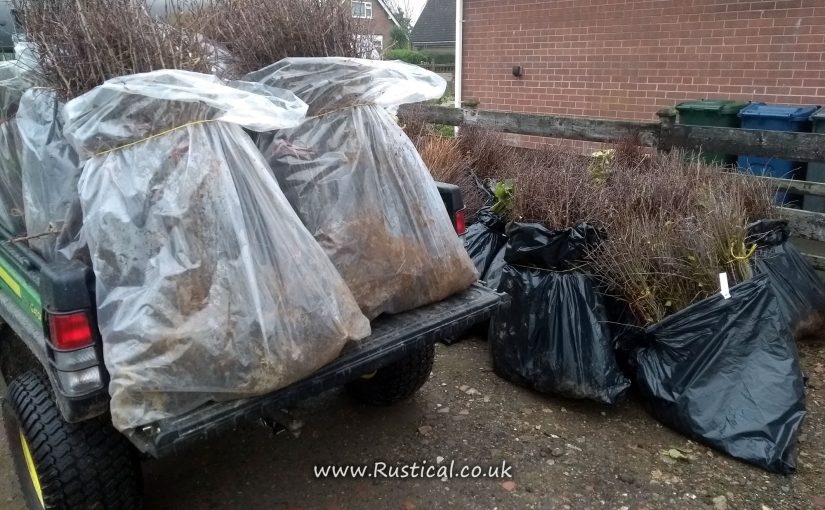 Our 2018 hedge plants have arrived so it is crucial to get them planted as fast as possible to give the transplants the very best chance of survival.

The plants arrived at 2pm and were all ‘heeled in’ by 5pm in an ‘on site’ trench where they will remain until removed for planting out in their final position. These were bough as 40-60cm plants but are nearer 40″ – 60″. The Brexit effect perhaps? Either way they look very healthy and should establish themselves quickly.

The planting will create some new hedgerows along boundaries  created by the separation of the traditional farm from the land and also restore a good length of historical hedging that was removed around 70 years ago.

Rain or shine planting has us 80% finished!

Still a few plants to go but getting there 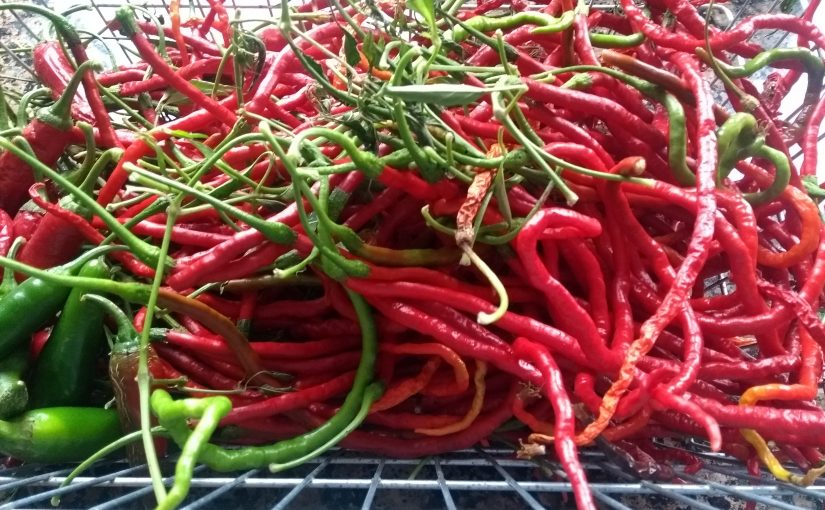 Now that all our pumpkins have gone (see www.BigPumpkins.co.uk) it’s the quiet time before the wreath making season begins so time to clear out the debris from the poly tunnels, then wash and disinfect everything ready for spring.

There are a few productive tomato plants left but all the rest are on the compost heap. Today we picked the remaining peppers of the Thunder Mountain and Jalapeno chilli plants.

Even the shed has had a tidy up. Everything seems to expand to cover any available floorspace so a determined effort is needed to put everything back where it should be in order to make some room for the Danish trolleys needed for our www.Christmas-Wreath.co.uk wreath collections. 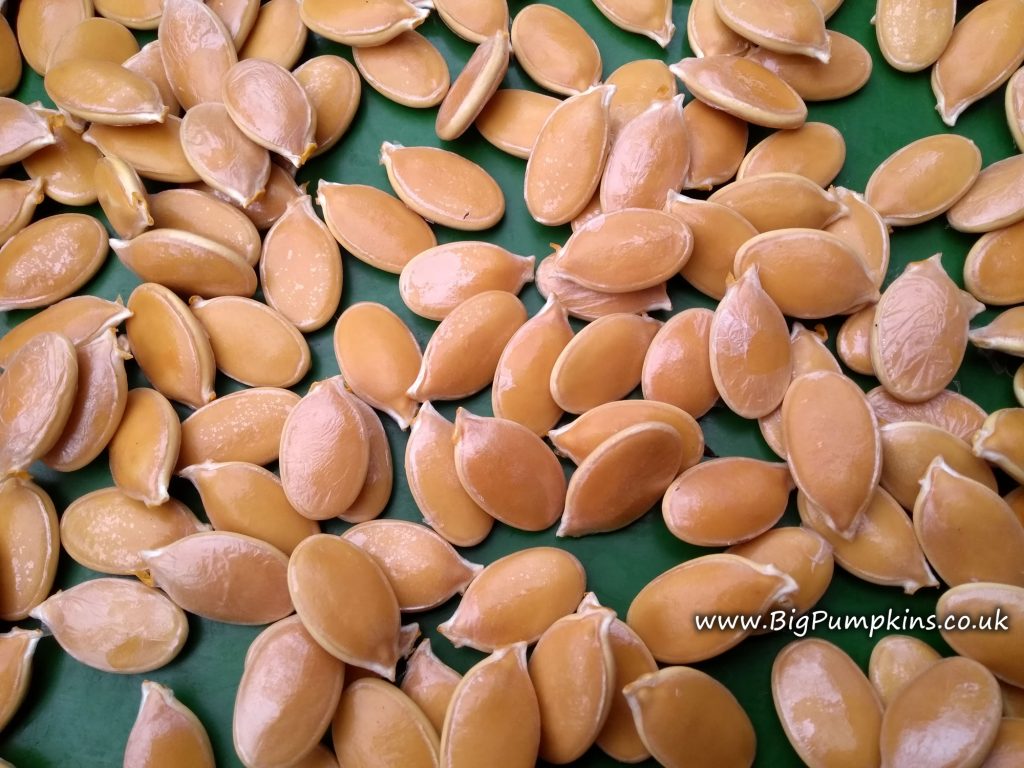 In quieter moments it is also time to do the field plans for next year (what crop goes where) and order seeds. The first of the bought in specialist culinary pumpkin seeds arrived this week and we started drying our own pumpkin seeds as well. All of a sudden 2019 doesn’t seem that long off.

It really doesn’t seem that long ago that we were pricking out these trees as seedlings and growing them on in pots ready for planting out. It turns out we started planting out in this field in 2010.

It was a bit of a milestone to be starting to do the first cut on selected trees this week. Alder was urgently needed to replenish the wood chunks used by our local smokehouse customers with Ash and Silver Birch used for making things and (as a last resort) fire wood.

The little Makita electric chainsaw was given it’s first outing on coppice duties and performed well, if anything too well as I had hoped the batteries would give out before I did.

The bar is for measuring the log length. The majority will not need splitting but, if they do, that is the maximum length that the splitter can take. The sticks also fit in an IBC crate which facilitates drying and minimises further handling.

As we were only taking out selected trees it opened up the canopy just enough to let some light in. The remaining branches will be ‘chunked’ for wood fuel with the fine brash stacked to provide habitat as it rots down. 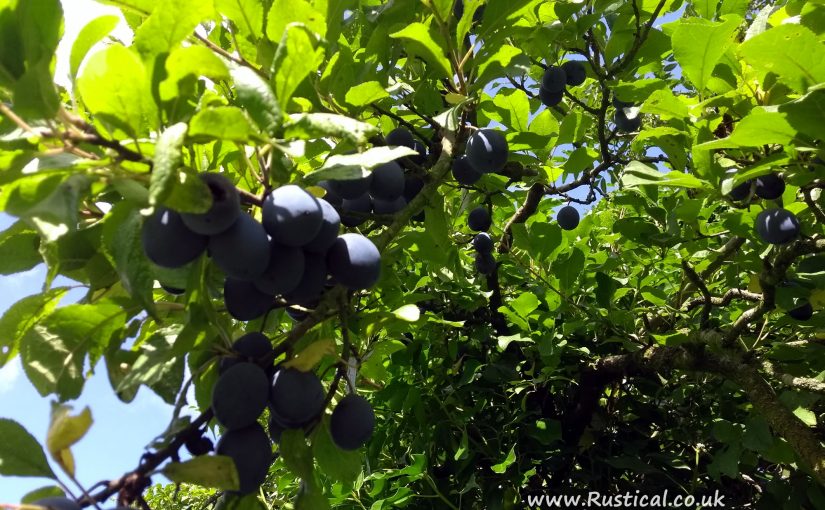 It’s that time of year when our wild damsons are just coming ready so time to risk life and limb reaching over the very deep ditch to try and hook the branches and get them harvested. Probably three quarters of the fruit is inaccessible so I don’t feel that guilty about raiding the natural larder.

Most of our share will end up as jam courtesy of mother; some sold to raise money for her charities, some for us and some for the breakfast table at Coed Cae 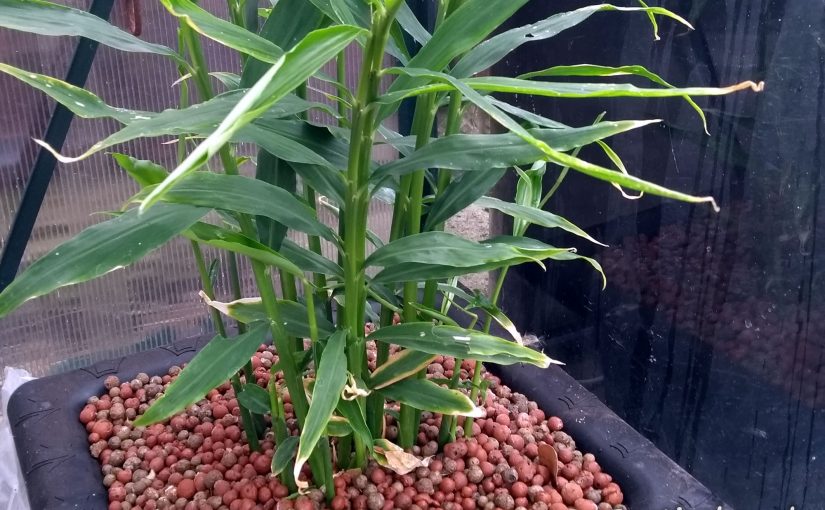