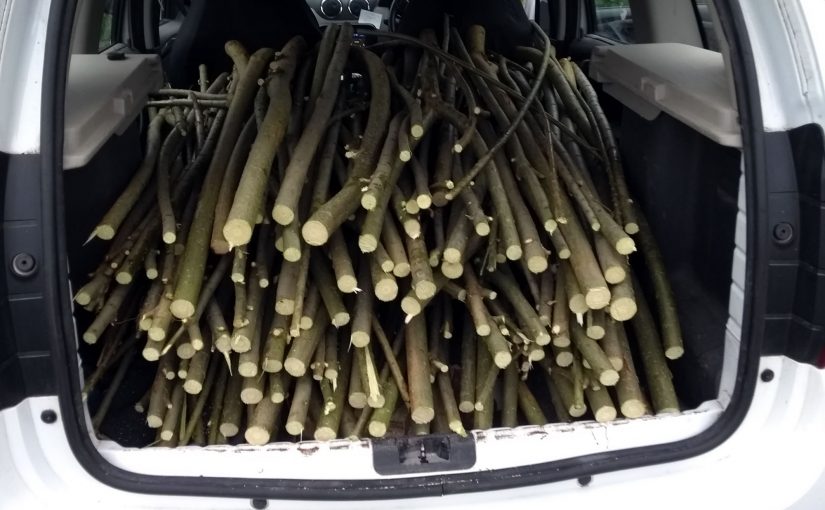 A dry day (at last) allowed a late afternoon walk through a row of hybrid willow short rotation coppice (SRC) to hand cut poles of 7cm dia or more for processing into wood chunks to be used as fuel in BBQ’s, wood fired Pizza Ovens, Wood boilers wood burners.

Whilst a mechanical harvest is much faster, it would clear all stems and thus be much more disruptive to the habitat. Hand cutting allows only those poles which have achieved the optimum size to be cut leaving the rest for future years.

It might be some time before we can get on to the ground with a trailer to collect the harvest but at least this row has been cut through.

A few sticks were brought back to the yard for processing into wood chunks. Once dried, the willow wood chunks makes a first first class fuel for wood ovens and also as a great alternative to lumpwood charcoal on BBQ’s (just light it 15 minutes earlier than you would with charcoal).

The chunker is powered by a tractor and makes short work of all the sticks fed into it. The wood chunks are then air dried in plastic trays for a year.

The chunker will process seasoned sticks but it is much kinder to feed it freshly cut sticks as it is far easier for it to processes them and it makes less splinters whilst doing so.

Once in plastic trays, the wood chunks are stacked up on a pallet and air dried for at least one year before they are ready for use.